Our Balkan Train Trip & My Run In With An Inappropriate Drunk 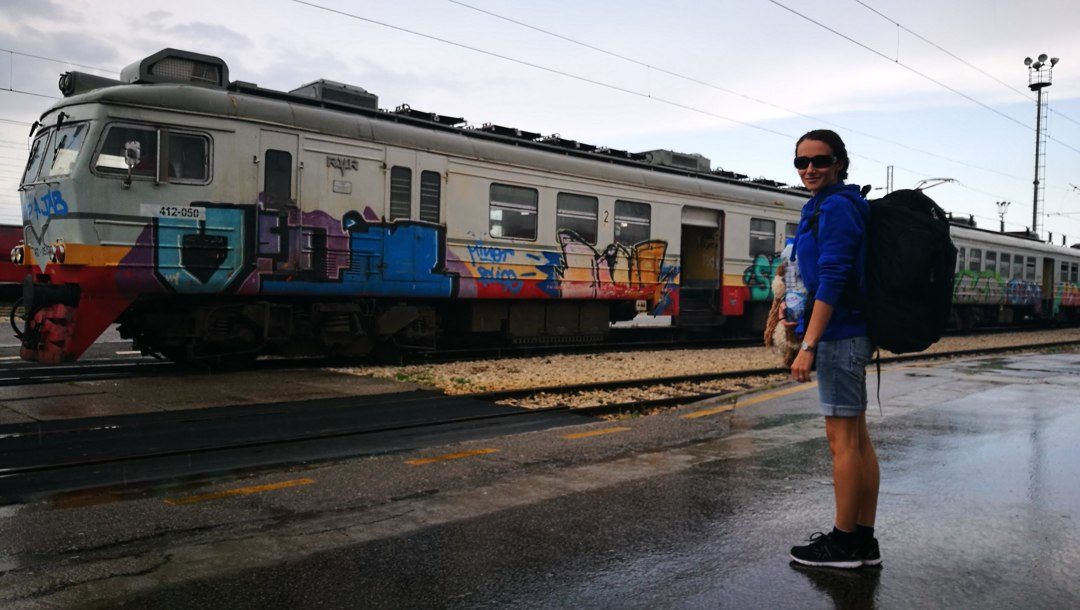 So I knew traveling via public transport would be different… But I didn’t realise it would involve a standoff with an inappropriate tramp!

I’d come across the Belgrade to Bar Train route a little while ago. It had made it onto our Bucket List due to it’s reputation as the most beautiful train trip in all of Europe. But when it came down to actually booking it I realised that it was probably not going to be as much fun as I thought.

Whilst it boasts stunning scenery, 254 tunnels and 435 bridges on the 296-mile journey, it takes 12 hours to complete the trip. Wayyy too long for the kids and probably too long for me too!

A little more research showed that actually we could still experience some of what it had to offer by just doing the last part of the journey, from Podgorica to Bar.

After our night in our cute Podgorica house, with an adorable little kitty that I wanted to bring home with me, we packed up and headed to the train station to catch the train to Bar. 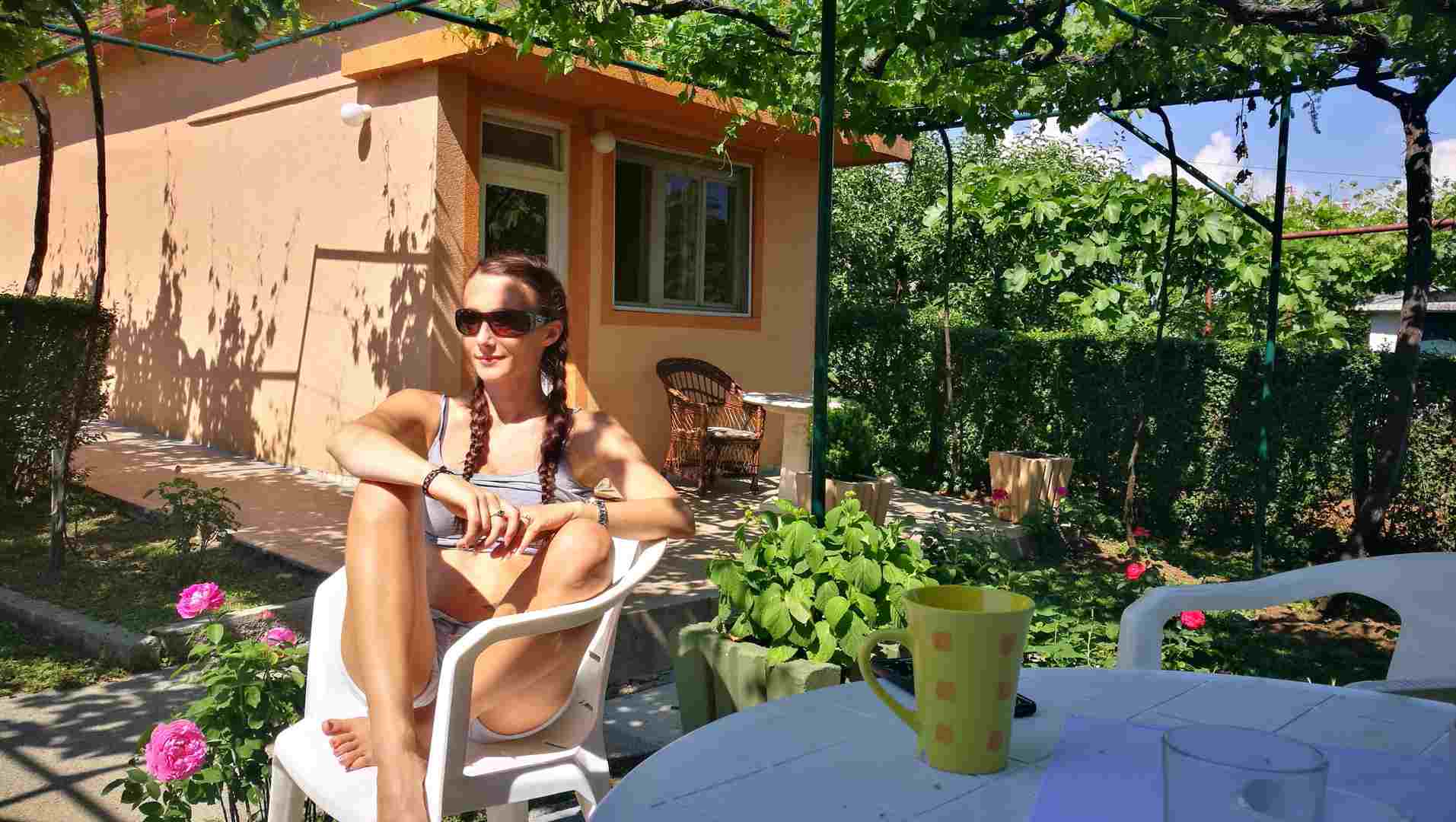 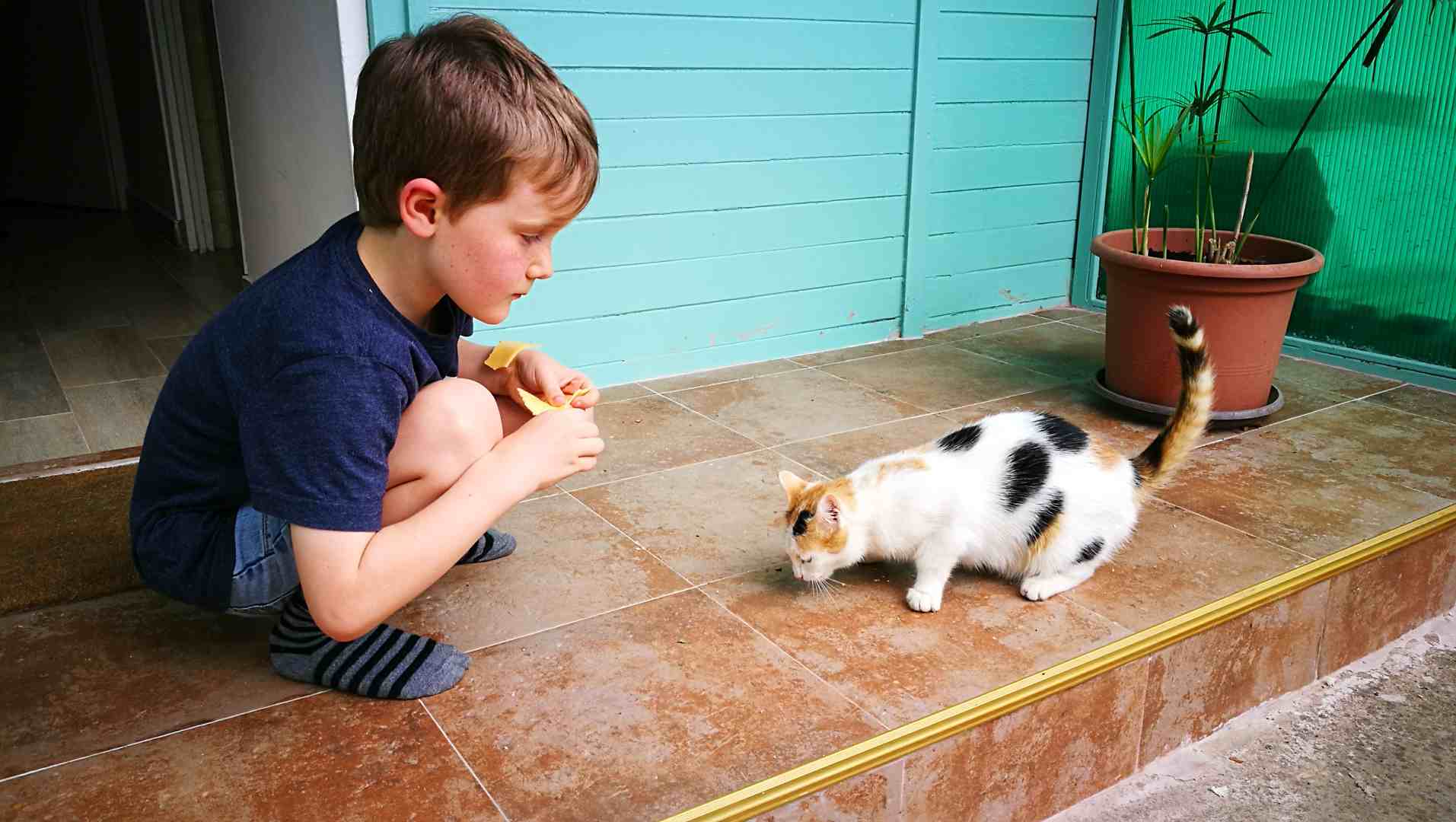 Our Journey Begins… In The Worst Train Station

Podgorica is the Capital City in Montenegro, but the train station is more like a back alley in Southampton than a station. The waiting room, if you can call it that, smelled like pee and was full of half broken seats stained with…well, I actually have no idea what.

We had quite a wait for the train, so we decided to leave the grotty waiting room to sit on the benches on the platform and admire the graffiti instead.

The whole place felt run down, dirty and a little uncomfortable. 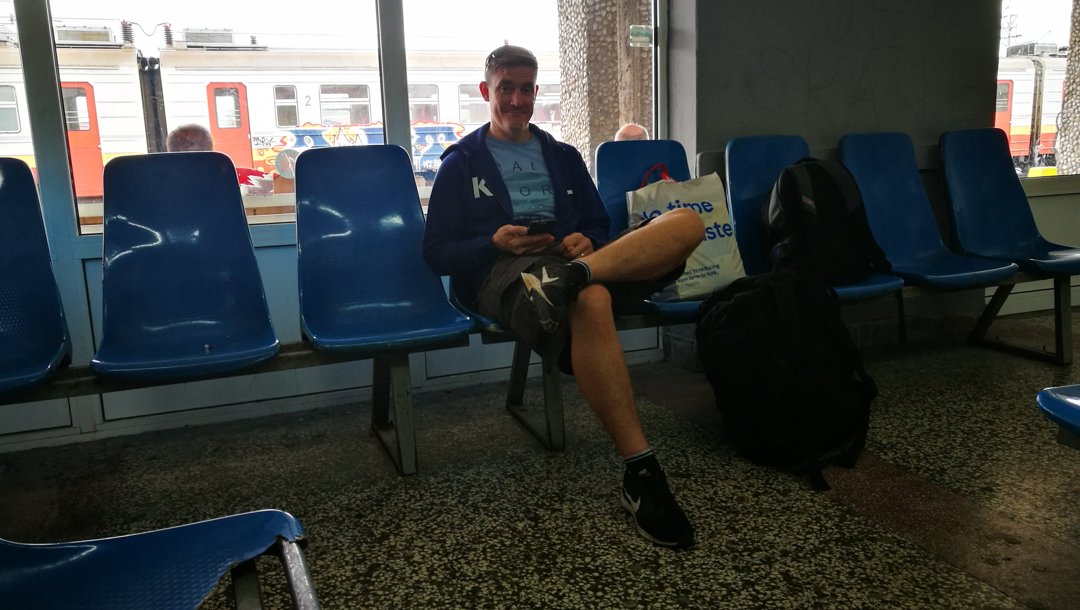 After a few minutes, a slightly drunk tramp came to join us.

He’d been noisily talking to the guy a couple of benches down, but had now ambled up the station and sat down on the floor just a few feet in front of me.

He continued talking loudly to the man on the other bench, but now every now and then would look at me. Like he was talking about me.

My Montenegrin is pretty poor so I had no idea what he was saying. But I knew it was about me. I kept reading my book in the hope that he’d grow bored and move along to someone or something else.

Clearly not content with my lack of attention, he then started adding in the odd English word and looking at me for a response.

So being British and polite I smiled. That was a mistake.

He then started winking at me and fluttering his eyelids at me.

I ignored him. He winked and fluttered again.

I stared right ahead.

Then obviously deciding this wasn’t getting the reaction he desired, he changed tact.

Along with his winking and eye fluttering he added in some rude hand gestures that I can only imagine represented what he had in mind!

Staring at me, poking his finger in and out of the circle he had made with his other hand, whilst winking and fluttering his eyelids at me.

I mean, WTF? That was the limit for me.

I stared him straight in the eyes and loudly said EXCUSE ME? In my best mum voice.

I don’t know what response he was expecting but I am pretty sure it wasn’t that. Eventually he muttered  something in Montenegrin and looked away.

By this point Al, who had been reading his book with headphones on, had just become aware of the situation and was keeping an eye on what was going on.

I know he would have dealt with the issue had I alerted him to it earlier, but I felt it was important for the man to see I was not intimidated by him and could handle the situation by myself.

Josh had noticed there was a problem and was watching, Jake still seemed blissfully unaware, playing with his toys. 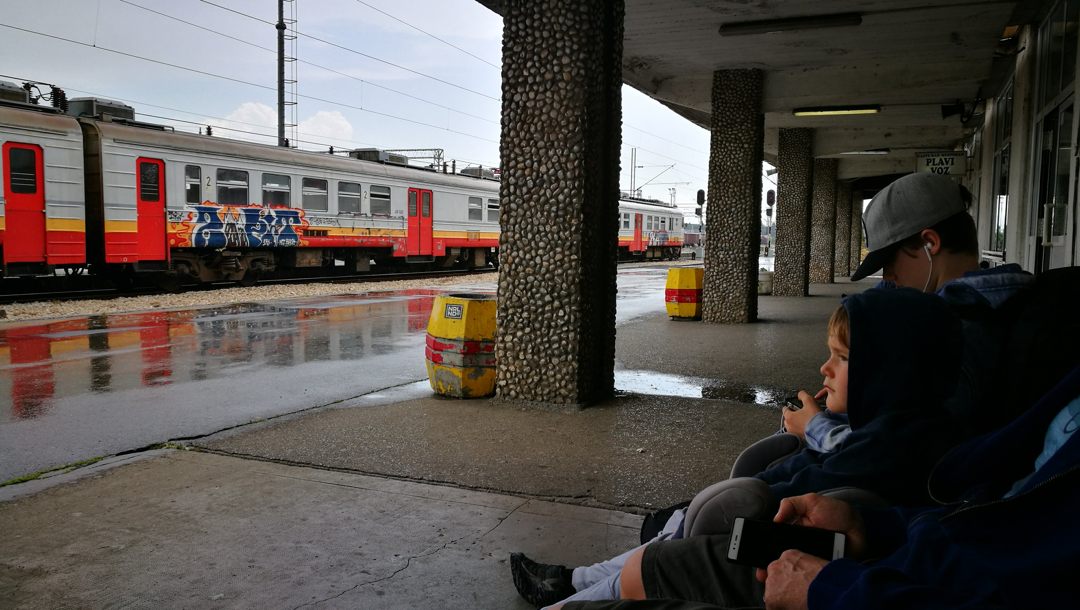 Clearly unhappy with my reaction our drunken friend now turned his attention to Jake.

Smiling at him. Waving at him. Talking to him. Whilst giving me dirty looks and flapping his hand dismissively in my direction.

Jake, being British and polite of course, smiled back. I sat watching, waiting to see what happened next…

Mr drunk stood up and walked over to where Jake was sat. He reached out and started to stroke Jake’s leg…

Before I really knew what was happening I had leapt up, grabbed his hand and stood myself in between them, blocking him from getting near Jake again.

Al wasn’t far behind me.

Drunky McDrunk stood still for a second. We stared at each other silently.

Then thankfully, he decided he didn’t like this game anymore and ambled back to his original bench at the other end of the station a few benches away.

An old man sitting next to me spoke to me in Montenegrin and patted the seat, gesturing for Jake to come sit there in between us where he would be safe.

I thought that might be the end of it.

But no. For the next 10 minutes my biggest fan proceeded to dance and play his recorder, staring right at me.

I went back to my ignoring plan. 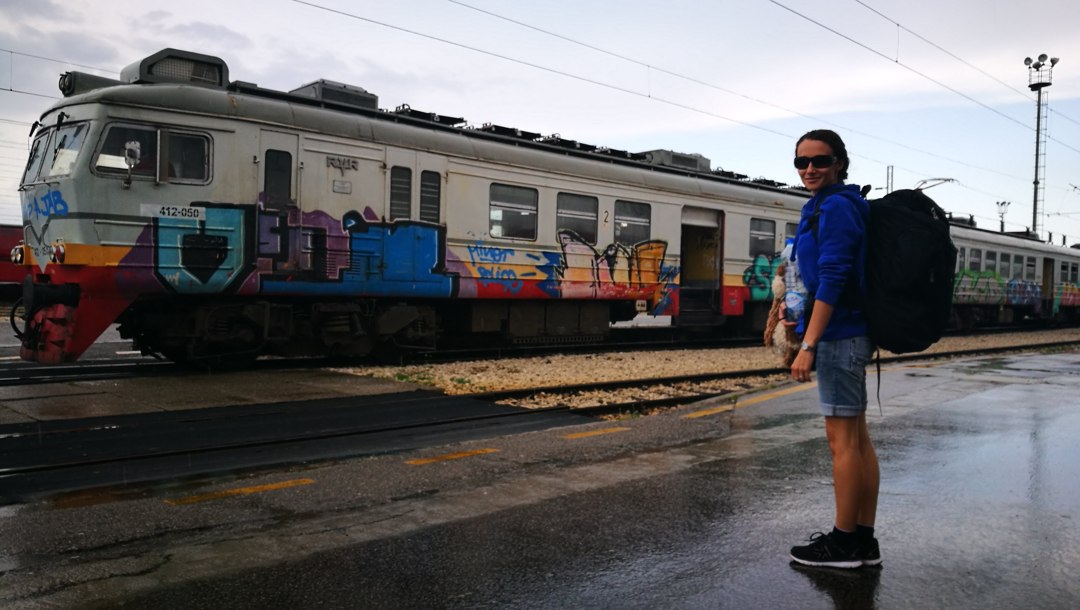 Eventually the train came and we left poor tramp man behind.

Whilst his behaviour was unacceptable and made me feel quite uncomfortable, I can’t help but feel sad for whatever happened to lead him to this point in his life. 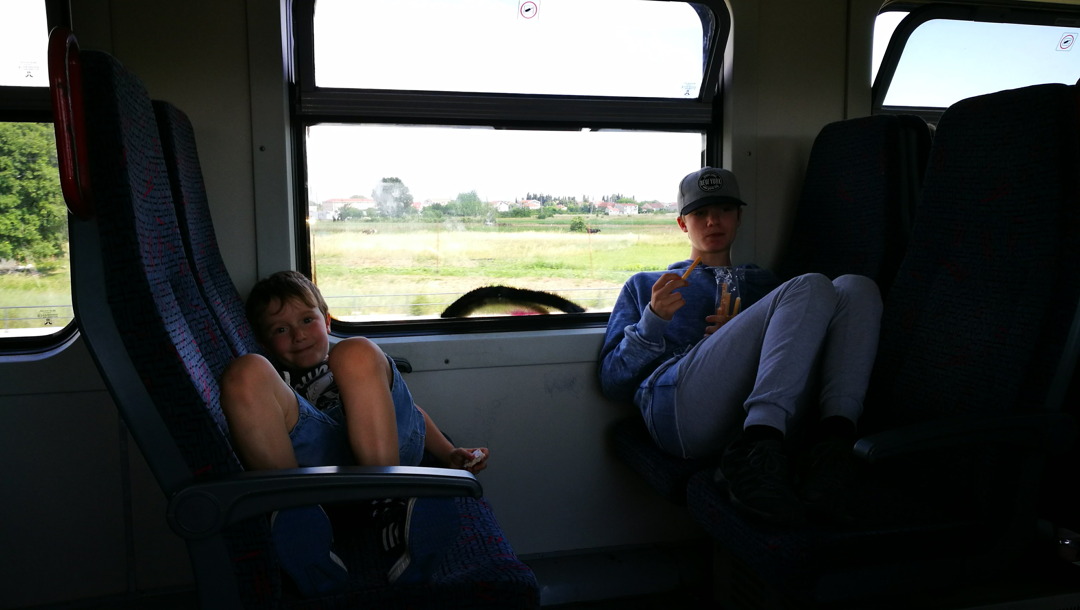 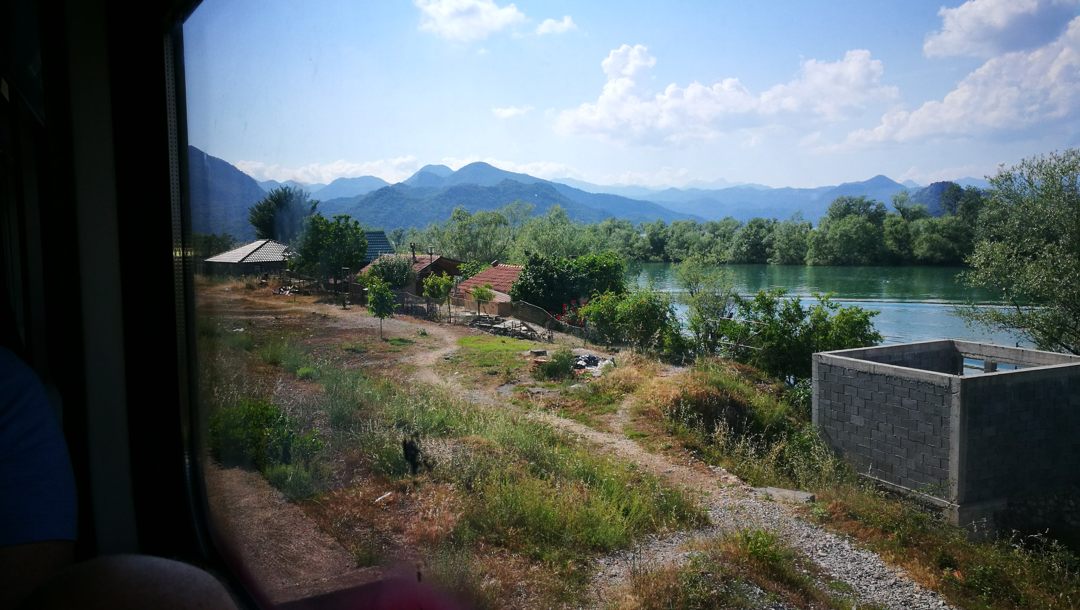 Anyway, safe and settled on the train. It was old, battered and covered in Graffiti. We rattled and bumped our way through the mountains and over the Skadar Lake to make our way to Bar.

The trip was fairly short, maybe an hour or so, but the scenery was stunning! If you’re ever in the region I’d recommend the trip – Just keep and eye out for our drunken friend!

Watch the video of our train adventure here…